I'm just going to go ahead and say that this was NOT my favorite pie. There won't be anyone begging for the leftovers of this one. It was decent, but something just wasn't right. I think it was the random nutmeg, in a "cream" pie that wasn't really cream, but was... If you're a die-hard rhubarb person (I'm not talking about us strawberry/rhubarb people) then maybe this is the pie for you. But I'd still do something about the nutmeg, maybe leave it out, or at least add cinnamon to go with it. And serve with lots and lots of vanilla ice cream. 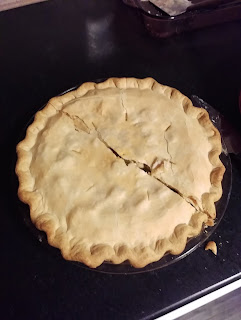 Adjust top crust, seal and crimp edges. Cut slits to allow steam to escape. Cover edges with foil to prevent over browning. Bake pie at 400° for 15 minutes, then lower oven temp to 350° and bake for another 45-55 minutes or until filling is bubbly in the center. Cool completely on wire rack before slicing. 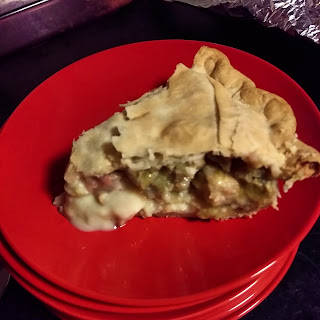 It's fun to see the personalities of our family members as they request their pie on the week they're assigned. Savannah's been begging for ice cream pie every time. She wanted homemade ice cream in a pie...that didn't happen. But, I did come up with this super easy, and delicious, alternate. 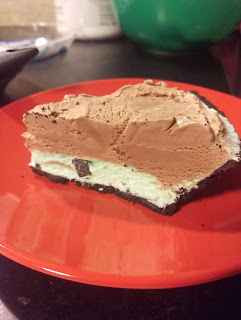 Soften ice cream, and layer in crust. Freeze, until firm. When serving drizzle with hot fudge.
Posted by Brooke at 10:40 AM No comments:

There are favorites emerging already, only 3 months into this pie extravaganza. This Triple Berry Pie, once a little soupy, but tried again by request this week, is a winner. It will be on the Thanksgiving menu. And perhaps a few other menus throughout the year. This time it turned out PERFECT!

I didn't use frozen fruit, even though the recipe said you could. Totally not recommended. And I used strawberries (instead of blackberries), blueberries and raspberries. Amazing. 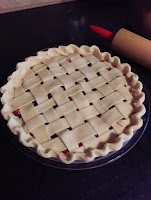 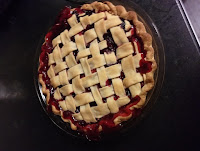 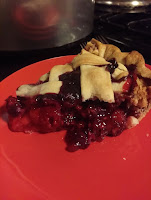 TRIPLE BERRY PIE (for the win)

Place pie on middle oven rack; place large cookie sheet on rack below pie pan in case of spillover. Bake pie 15 minutes. Reduce oven temperature to 375° and bake about 40-45 minutes longer, or until top crust is golden brown and filling is bubbly. Let stand for 1-2 hours before serving. (I didn't do this, because who has time for that??? It still worked fine, see above picture)
Posted by Brooke at 9:20 AM No comments:

This week's pie is again brought to you from the Ann Romney cookbook. I loved the Simple Apple Pie recipe so much I decided to try her Strawberry Pie as well. My family loves strawberries. A lot. If I could successfully grow plants I would have a yard full of strawberries, but alas I can't even keep an aloe plant alive (though with renewed effort I have plants all over my yard/house right now that I'm really trying to keep alive).

This pie would be perfect for a spring or summer dinner. It's really tasty, nice and light. Sorry for the picture, we were hungry for pie, this is what you get. 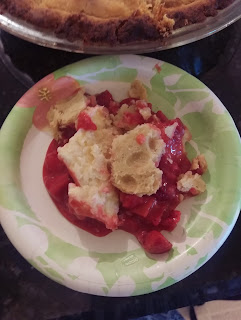 Clean and hull the strawberries. Thoroughly mash 2 pints of the strawberries. Stir in sugar and flour; set aside until they begin to gather their own juices. Place macerated strawberries into a saucepan and bring to a boil. Boil gently 1 minute. Cool to lukewarm.

Beat together cream cheese and powdered sugar until smooth. Spread the softened cream cheese on top of the prepared pastry shell. Spread cooled strawberry mixture over the top. Using the remaining pint of strawberries, arrange whole berries neatly (around the rim) on the pie. Refrigerate until ready to eat. Top with whipped cream or ice cream to serve.
Posted by Brooke at 8:57 AM No comments:

It's Springtime and it's gorgeous here in West Texas. The pollen count is abnormally high, and so are the temperatures. I'm loving it, but it's looking like it may be a really hot summer.

This pie is one of my kids favorites. They've requested in place of birthday cake several times, and because I'm a fan they've gotten no complaints from me.

It's an ice cream pie, so obviously it can be made in advance, if you've got the freezer room to store it, but the downside is you've got to let it freeze, so it can't really be a last minute dessert choice.

The original recipe came with regular lemonade, but we've done variations with pink lemonade, and my daughter's favorite, Strawberry Lemonade, which is what I get to share with you today. Enjoy! 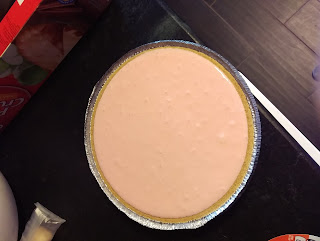 Posted by Brooke at 4:45 PM No comments:

So we had Chicken Pot Pie for dinner, but what would Monday be without pie for dessert too? I went simple, Apple Pie, and it was sooo good! This is probably my favorite apple pie recipe, and it's my simplest. I found it in Ann Romney's cookbook, and it's definitely a keeper.

Preheat oven to 425°. Line a 9-inch pi plate with half of the pastry dough. Peel and core apples. Slice into pie plate over unbaked crust. Add sugar, dot the butter on top, sprinkle on flour, and mix it all together with your hands. (I mixed everything, including the apples in a large bowl before putting it into the crust, much, much easier and less messy...). Ann writes, "I like mine plain, so I don't add any seasonings", but I added the cinnamon and loved it. Roll out remaining pastry dough and lay gently on top of pie. Cut a few slits in top of the dough.

Last week was Spring Break. Thank goodness! We traveled to the Houston area, enjoyed rain and fun with family and didn't think about pie all week. It was kind of a nice break before heading into our Pi Day 2016 extravaganza.

Normally we just have pie for dessert on March 14th, but this year because we've been having pie every week I decided to do Chicken Pot Pie instead. I've never made it, my husband is picky about it, and I'm pretty sure my kids have never eaten it. We'll do it again, this was definitely a winner! 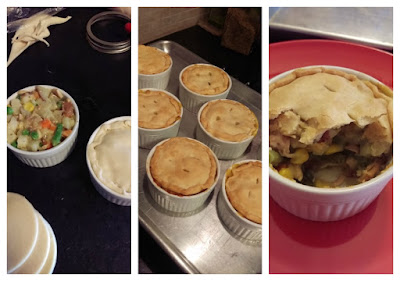 Seriously, this was comfort food all wrapped up in a delicious pie crust, filled with healthy veggies, and chicken, served in the best little package ever!

I got the recipe idea from Our Best Bites. (I own all of their cookbooks, they're my go to place for recipes). I adapted a little bit, but for the most part stayed true to their recipe, because "if it ain't broke, don't fix it".

1 - Boil potatoes until tender.
2 - Meanwhile saute onion in butter until it's translucent.
3 - Combine soup, chicken, veggies, onion and potatoes in a mixing bowl and season to taste.
4 - Fill pie crust (or ramekins/mugs) with chicken mixture, top with crust, crimp edges, cut some vent holes, place on a cooking sheet, then bake for 40-45 minutes, or until crust is golden brown. Remove from oven and let stand for a few minutes before serving.
Posted by Brooke at 10:36 PM No comments:

My husband had a friend in college who had diabetes. He had an insulin pump and loved his "external pancreas" but didn't really take care of it... for example, he loved (LOVED) chess cake. For those not familiar with chess cake, it's basically a little bit of flour, a little bit of lemon, some eggs, and a big bag of powdered sugar... This roommate would make the cake, crank up his pancreas, and go to town.

Not to chase you off, but this week's pie is Chess Pie. A first cousin to Chess Cake. This recipe has a lot (A LOT) less sugar than the cake version, but if you're on a diet you might want to move on. There's really not a great way to make this one healthier. This is a "I-had-a-bad-day-and-desperately-need-comforting-food-in-the-form-of-lemony-sugary-pie" pie.

Plus I live in the South, this is a standard. Down here people eat Pecan, Pumpkin, Buttermilk and Chess pies. I'm pretty sure that's it. 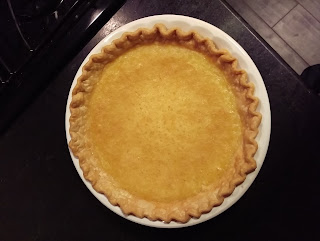 LEMONY CHESS PIE (adapted from about 3 different recipes to make it as yummy and healthy as possible...

Cream together sugar and butter. Add eggs, then milk. Mix in flour, cornmeal, lemon juice and rind. Pour into crust and bake at 350° for 50-55 minutes. Let cool for 10-15 minutes.

Posted by Brooke at 1:08 PM No comments:

There's nothing like the classic pumpkin pie to make you feel at peace. It's really hard to mess up a good pumpkin pie recipe, and I've stolen my mother-in-laws, so it's just about perfect. Put a dollop of freshly whipped cream on top and you'll be in heaven! 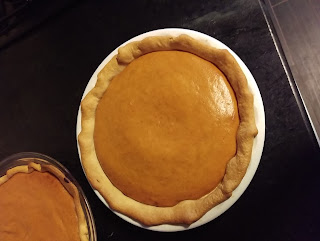 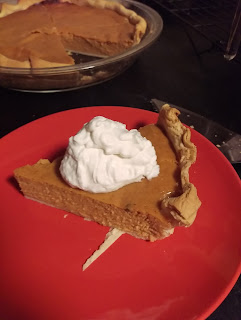 Preheat oven to 425°. In a large bowl, combine pumpkin, sweetened condensed milk, eggs, and spices. mix well and turn into pie shells. Bake 15 minutes, reduce oven to 350° and continue to bake 35-40 minutes or until knife inserted comes out clean. Cool before cutting. Garnish with whipped cream.

Posted by Brooke at 1:06 PM No comments:

I'll be honest, we're 9 weeks into this challenge and I'm still all in, but my husband is getting a little tired of pie...and it was his week to pick. He wanted molten lava cake, one of my specialties, and I needed pie. So we compromised. 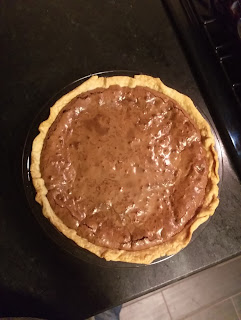 Not my favorite, but everyone else ate it up. I'd rather have my flowing chocolate in a ramekin, with no crust. 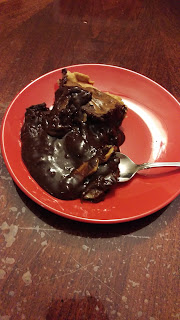 But, it was chocolate-y and molten-y, so at least the recipe was a success!

I based this off of THIS RECIPE from Chef Carla Hall.

1 - Preheat oven to 350°, bake pie shell and allow to cool.
2 - In a glass bowl, melt chocolate chips and butter in microwave, stirring every 30 seconds until melted and smooth. Don't over heat. Let mixture cool slightly.
3 - In a separate bowl, use a mixer to whisk eggs and sugar until thickened, mix in flour and salt, then blend into the chocolate mixture until just mixed.
4 - Pour into baked pie shell and bake for 20-25 minutes. Will be slightly dry on top and look a little jiggly in the center.
5 - Remove from oven and cool for 10 minutes (we didn't have time to wait, so mine was a little runnier than if we'd waited).
6 - Garnish with chopped nuts. (optional)